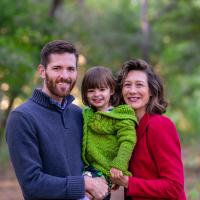 Carrie Chambliss grew up in a family of early childhood educators, who had her singing and performing when she was less than 3 years old. She went on to sing in the Indianapolis Children's Choir and to play the piano and clarinet before she was 10 years old. Outside of an occasional vocal performance in a graduate school rock band, Carrie had not exercised her musical talents until the birth of her daughter, when singing lullabies and writing songs for her daughter became a creative, bonding ritual.  Eager to expose her daughter to enriching activities, she enrolled them in Music Pup's classes and they both fell in love with the music and activities.  Carrie founded The Music Park to bring this experience to other families in north Dallas. She has a B.S. degree in Business from Indiana University and an M.B.A. from the University of Texas in Austin.   Carrie resides in Richardson, Texas with her husband and daughter.