FAQ
Q: Will your classes help to make my child smarter?

A: There’s a growing body of research suggesting that early exposure to music not only enhances your child's ability to create and enjoy music, but increases brain plasticity. Plasticity is flexibility in brain function and enhances many aspects of brain activity, and also facilitates recovery from brain injury.

Q: Why do your programs involve parents and caregivers?

A: Parents and other primary care givers play a critical role in their child’s music development.  We not only provide parents with music and activities to take home and repeat throughout the week, but we also encourage meaningful social interaction around the music.
• Mirror: Observe closely and acknowledge your child’s emerging musical expressiveness. When you see your child doing something new, imitate and enlarge upon those ideas to reinforce your child’s creativity.
• Model: Provide a shining example by modeling an enthusiastic engagement with music.  Adapt the songs to suit your everyday routines and create musical conversations with your child.
• Touch: Physical touch provides powerful stimulation to neural pathways. Bounce, lift, tickle and dance during music time.

Q: My child won’t sit still in a circle.  Can he still benefit from your class? 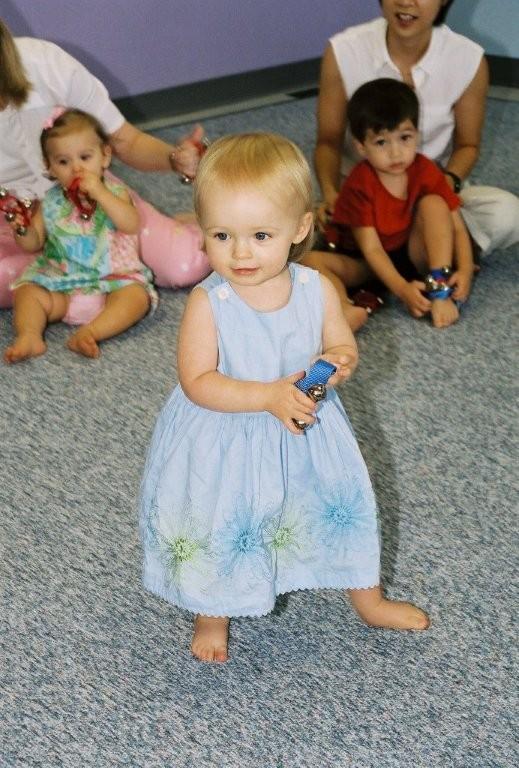 A: Some children want to run; others want to spend the class no more than a foot away from the teacher; some will sit in laps; while others want to observe from a cozy corner in the room. At The Music Class we recognize that there are many different learning styles, and we encourage parents to let the children be where they are comfortable. A typical class may have all of these different types of children, but all children have one thing in common: they are all watching, listening, and learning from us.

We have found that regardless of your child’s learning style, the more frequently your child listens to our music at home, the more likely he or she is to stay focused in class.  So be sure to do your homework by listening to the music every day!

Q: How do you keep such young children focused for 45 minutes?

A: One of the secrets to teaching music successfully is to maximize the amount of active participation involved. When children are moving their bodies, actively singing, keeping the beat with their hands or instruments, dancing, or acting out a song—it ensures that they that are optimally engaged in the music experience.   In fact, research shows that infants can perceive the beat more readily if bounced to it.  With the variety of active participation activities we experience in class, children stay focused and time flies!

Q: My baby is 4 months old.  Can she benefit from class now, or should I wait until she can walk?

A: There is a growing body of research to that suggests the younger a child is, the more she is learning. Even though a baby cannot run, clap or sing in class, her brain is developing at a faster rate than the brains of the big kids. Additionally, research suggests that during the second 6 months of life the brain is already prioritizing: discarding the neural information pathways not stimulated by its environment. So yes, the best possible time to start Music Pups is when your child is a baby! 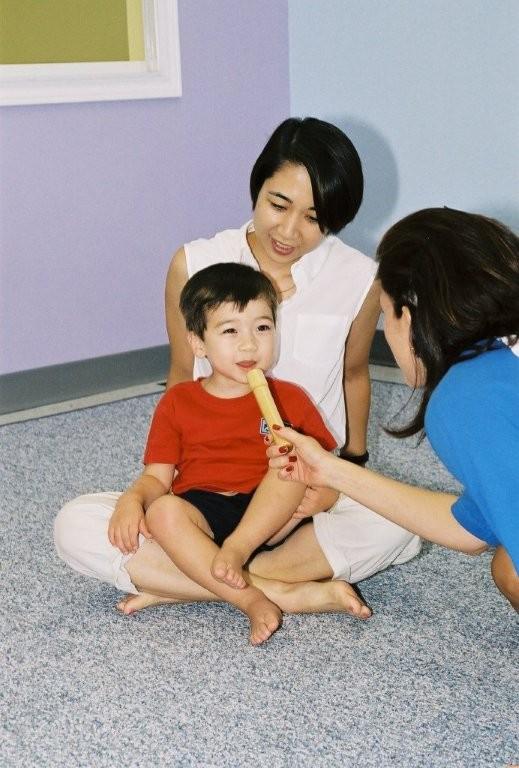 Another way to think of this is to compare learning to speak with learning music. In the same way that talking to your baby from birth is critical to your child’s language development, exposing your child to music from birth benefits her music development.  Of course your baby cannot show you how much she is learning now. Be patient! Let her feel the beat, listen to you sing, and observe in class. Absorbing musical sounds is the first step in music development. When she becomes a toddler she will surely blossom. Then you will see first hand the benefits of coming to class during that precious first year.

RESEARCH FACTS
BENEFIT OF INTERACTIVE MUSIC CLASSES ON INFANTS:  Researchers at McMaster University in Canada found that infants who participated in parent/child interactive music classes had a better understanding of music and improved social development compared to infants who listened to background music only.

In the first study of its kind, researchers assigned 6-month old babies to one of two types of musical experiences. In one group the babies participated in a parent/child interactive music class involving singing, movement, instrument play and a take home CD. (Sound familiar?) In the other group the children listened to music from Baby Einstein CDs in the background while involved in art and play activities, and received the same CDs to take home and listen to. At 12 months, the babies who participated in the interactive music class showed a greater understanding of tonal pitch structure and an enhanced response to music than the babies who listened to background music. In addition, they showed less distress in unusual situations, communicated better and smiled more!  Trainor et al. 2012. Becoming musically enculturated: effects of music classes for infants on brain and behavior. Annals of the New York Academy of Sciences 1252:129-138

INFANTS DETECT THE BEAT IN MUSIC: A 2009 study showed that newborns can process music even if they don't show an outward response.  Researchers played consistent percussive rhythm patterns and then occasionally changed the pattern for newborns who were sleeping.  The newborns were able to detect the change! How do we know? Tiny sensors on the surface of their heads were able to detect a change in their brain waves.  Winkler, I., G. Haden, O. Ladinig, et al. Newborn; infants detect the beat in music. Proc. Natl. Acad.Sci. 2009; 106: 2468-2471.

MOVEMENT INFLUENCES INFANT RHYTHM PERCEPTION: In this study, seven month-old Infants were bounced to a specific beat (either in duple or triple meter). Afterward they paid attention longer to music with the same beat they were bounced to.  Infants that listened to the same music but weren't bounced did not show a preference for either type of beat. This demonstrates that infants of this age can perceive the beat more readily if bounced to it.
Phillips-Silver J, Trainor LJ. Feeling the beat: Movement influences infant rhythm perception. Science 2005;308:1430.

NEURAL DEVELOPMENT: A study of children 5-7 demonstrates that musical training results in more connections (neurons) forming between the right-brain and the left-brain.  Researchers looked at images of the brains of the children before assigning them to one of three groups: high-practicing, low-practicing, and no music instruction. There were no differences in left-brain, right-brain connections prior to the musical instruction. However, after two years of musical instruction and practice, these children had more connections than children not given musical instruction.  The children assigned to the high practicing group had the most number of connections.  Schlaug G, Forgeard M, Zhu L, Norton A, Norton A, Winner E. Training-induced neuroplasticity in young children. The Neurosciences and Music III: Disorders and Plasticity. Ann NY Acad Sci. 2009;1169:205-8.

ENVIRONMENT EFFECTS BRAIN DEVELOPMENT:  Nobel prize winning research by doctors David Hubel and Tortsen Wiesel of the Harvard Medical School found that if a healthy kitten or monkey was raised with one eyelid sutured closed during the first few months of its life, the animal would be permanently blinded in that eye.  This research from the 1960's documented the fact that the brain is not fully developed at birth. Instead brain development continues during the first years of life and the environment directly effects that development.
Kandel E, Schwartz J, and Jessel M.  Principles of Neural Science.  Appleton & Lange 1992

USE IT OR LOOSE IT CONCEPT: Researchers at the University of Washington in Seattle compared language perception between Japanese and American infants. They investigated the ability of these infants to distinguish between the sounds of R and L.  (R and L are both used in English, but there is no L sound in the Japanese language, only R.)  They found that at six months of age English and Japanese infants could equally distinguish between R and L sounds.  By 12 months, the Japanese children had lost the ability to distinguish the difference between R and L sounds. Meanwhile, at 12 months, the American children had become better at hearing the difference between the two sounds.

How does this relate to music?  This study exemplifies how quickly and dramatically the human brain is developing during the first year of life.  During the first six months the brain is receptive to all sounds.  By the second six months the brain is already prioritizing: discarding the ability to distinguish sounds that are not part of its environment, and reinforcing the ability to distinguish sounds that it hears regularly.

Since music and language are both sound based, one could hypothesize that a similar process occurs with music.   Exposure to a wide variety of musical sounds and adequate repetition of those sounds between the ages of six and twelve months may have a lasting impact on the brain’s ability to perceive those sounds.  Lack of musical stimulation during this sensitive time may make it more challenging for the brain to understand musical sounds in the future.
The Secret Life of The Brain. Richard Restak, M.D. The Dana Press and Joseph Henry Press, 2001

RHYTHM AND MOVEMENT BRAIN CONNECTION: Music educators have long believed that one of the best ways to teach rhythm is through movement. We’re now seeing the science behind this concept come to light. Dr. John Iversen, researcher at UC San Diego (and a long time drummer), is doing studies that suggest the perception of rhythm involves not just the part of the brain that processes sound, but also the part of the brain that controls movement.  Yes, there’s a reason we jump, run, skip, twirl, and shake instruments in class.   Each way we can comfortably move our bodies relates to corresponding rhythms we can more accurately produce.  It’s exciting to see the science developing that shows this connection!

Click here to return to our center home page